Design rarely becomes outdated over a year. Ideas spread gradually, migrating from one niche to another, so that many trends in 2020 are still relevant. But there is still something new in the design world. Or at least a well-forgotten old thing.

1.Blue is not the only one

Surely everyone has already seen the color of the year declared by Pantone - classic blue, symbolizing reliability and tranquility in our volatile world. There it is: They got into my pain, the soul asks for stability and classic blue!

But the designers are not the only ones who decide trends, there are also interesting forecasts from Shutterstock. These guys are analyzing pixels in images that their clients have downloaded over the past year. On their list, colors are more fun and saturated.

The second color from Shutterstock is Aqua Menthe (# 7FFFD4). It looks modern, complex and ambiguous: it seems to be both bright and calm at the same time. Color works well for backgrounds and textures.

And this is the answer to the classic blue - Phantom Blue (# 191970), blue with a touch of purple. Much more active than Pantone Blue

The dominance of bright or muted colors can never be said unequivocally - each goal needs its own means.

But for mass advertising, something brighter will always be relevant, like the color of lava from Shutterstock. And here's a fresh one from my feed: This is Lash Lava in action. Pay attention, even trendy shades can be spoiled by unsuccessful combinations.

2019 marks the 100th anniversary of the founding of the Bauhaus School, influencing in many ways modern typography, photography and design. Simple shapes, minimalism, clear geometry - it all started with the Bauhaus.

By the memorable date, a wave of nostalgia for design rose, in which the idea of ​​simplicity was exaggerated and elevated to the absolute. Remakes of famous logos have become popular on the net: This is how modern companies might look a hundred years ago.

In the past years, many companies have picked up the Bauhaus style not only in an ironic but also in a serious way. Let's take a look at an internationally awarded Russian example - an interesting packaging built on a simple rough frame for restaurant food Bergen.

The new image of the Bookvoed bookstores is also quite in the spirit of the beginning of the last century: hefty commas, a simple smooth logo font, a combination of color spots with black-and-white photos: Despite the laconicism, the design looks warm and soulful.

There are a lot of graphs with references to the Bauhaus now. Simple pure forms exist in our information field along with three-dimensional pictures and animation. Maybe that's why we haven't gone crazy with the amount of advertising around.

3.Metal of all colors of the rainbow

The demand for metal textures has only been gaining demand in the past few yaers: this applies to both digital and packaging design. The trend was tracked at Pantone and the line of metallics was updated: 655 shades.

Mostly with metal textures, we meet on tangible media: on boxes, leaflets, business cards. But in the digital world, brilliant colors are also popular - for some reason we stumble upon them very often in 3D graphics.

Metallic is a great thing to attract attention. And if golden-silver textures have long been in the trend, then the remaining 653 shades of Pantone have not yet had time to bore everyone.

Yes, two-color pictures have been in fashion for several years by now. They are so beautiful, comfortable and versatile that it is impossible not to mention them. And most importantly, they are still everywhere: in the printing industry, social networks, and especially often on websites.

Photos, split into two colors, help to make the interface coherent: the diversity of pictures will not distract the user from the buttons they need.

Another beauty of duotones is the relative ease of work. It is difficult to make a beautiful full-color composition. In any art university, training begins precisely on two colors - light and dark. This means that any non-designer can handle the duotone, if desired. If two colors are not enough, you can combine different duotones - it is still easy and looks stylish: It would be very difficult to find full color images for such a collage.

If you look at the rebranding of large companies, you can see that the business is decisively abandoning color. A few illustrative examples:

A small black logo, like a little black dress, is a universal solution in an era when everything is changing rapidly and it is not clear how to live and what design to do. These logos will obviously last a long time, they will not become obsolete right away. Namely, time in this case is an important indicator of the quality of design: rebranding always entails high costs.

Will black be the new selling color now? Already this year, there was information about the change of logo for the TripAdvisor service. The little owl also turned noticeably black. The first logo had three normal positive colors.

More fun, a black owl on a green background.

Animation in logos is by no means a new trend,it has been relevant for several years. Perhaps it goes hand in hand with simplification and rejection of color in static signs. Such a corporate identity is more flexible: the animation can be changed depending on the fashion, and the main symbol can be left unchanged for many years.

This trend is controversial, but quite fresh. It deals with buttons, icons and cards in interfaces: in simple terms, they can become more realistic. In the 20's, interfaces were developed in the paradigm of skeuomorphism, that is, imitation of real objects (everyone remembers the icons of pencils, notebooks or watches with artistic detail, shadow and volume demonstration). Then came the fashion for minimalism and flat images: the icons in our phones, on websites or in applications are now very simplified. Perhaps things will change soon.

Neomorphism is a combination of a flat image with a volumetric one. Elements of such an interface have a shadow and a highlight, and due to this they lie outside the plane of the background. Talk about this trend began with a viral picture on Dribble: Here you can clearly see the peculiarity of neomorphic elements. They are flat and stylized, but realistic in relation to the background, thanks to shadows on one side and highlights on the other.

Other neomorphic concepts that have flooded Dribble include: 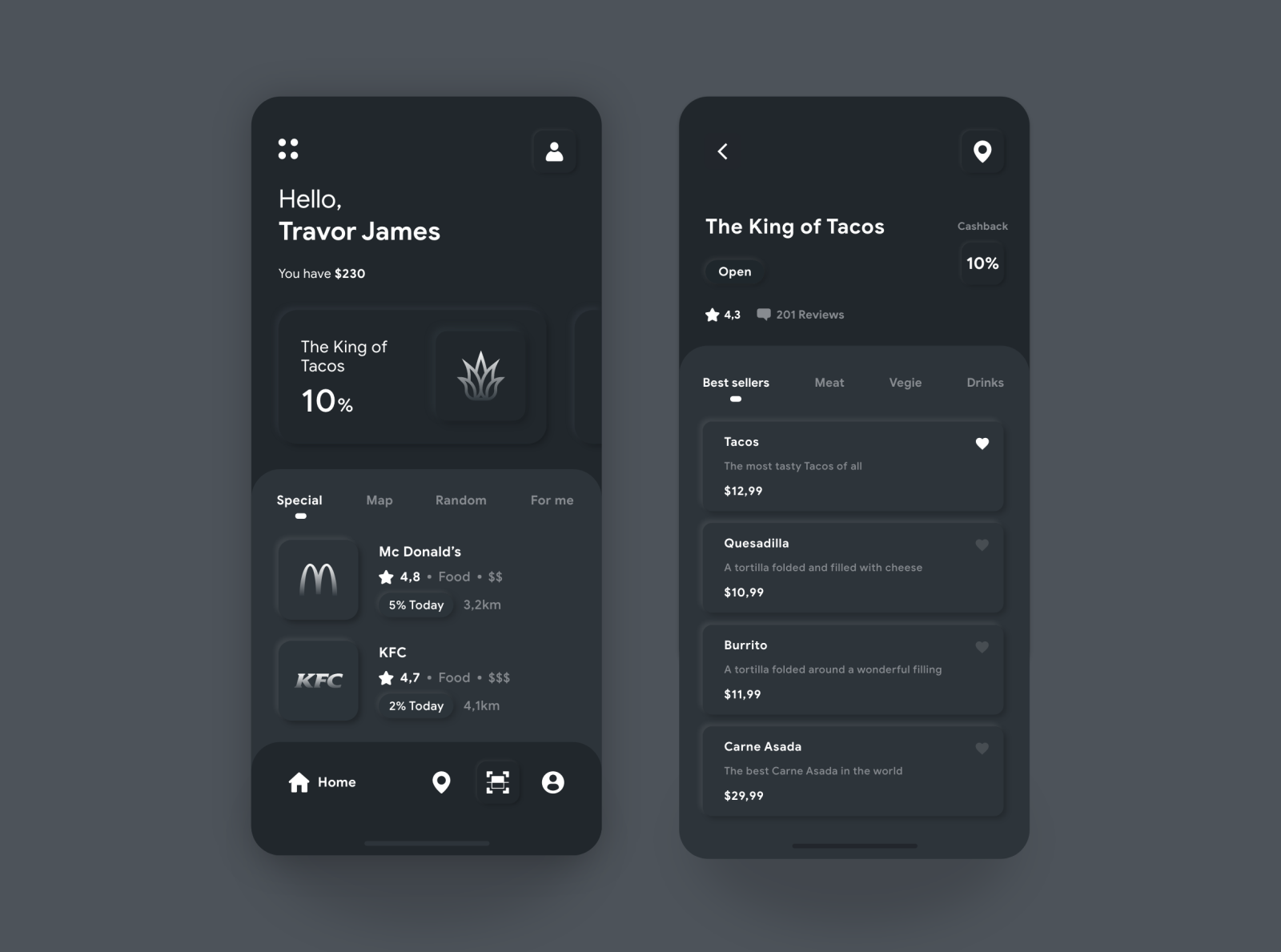 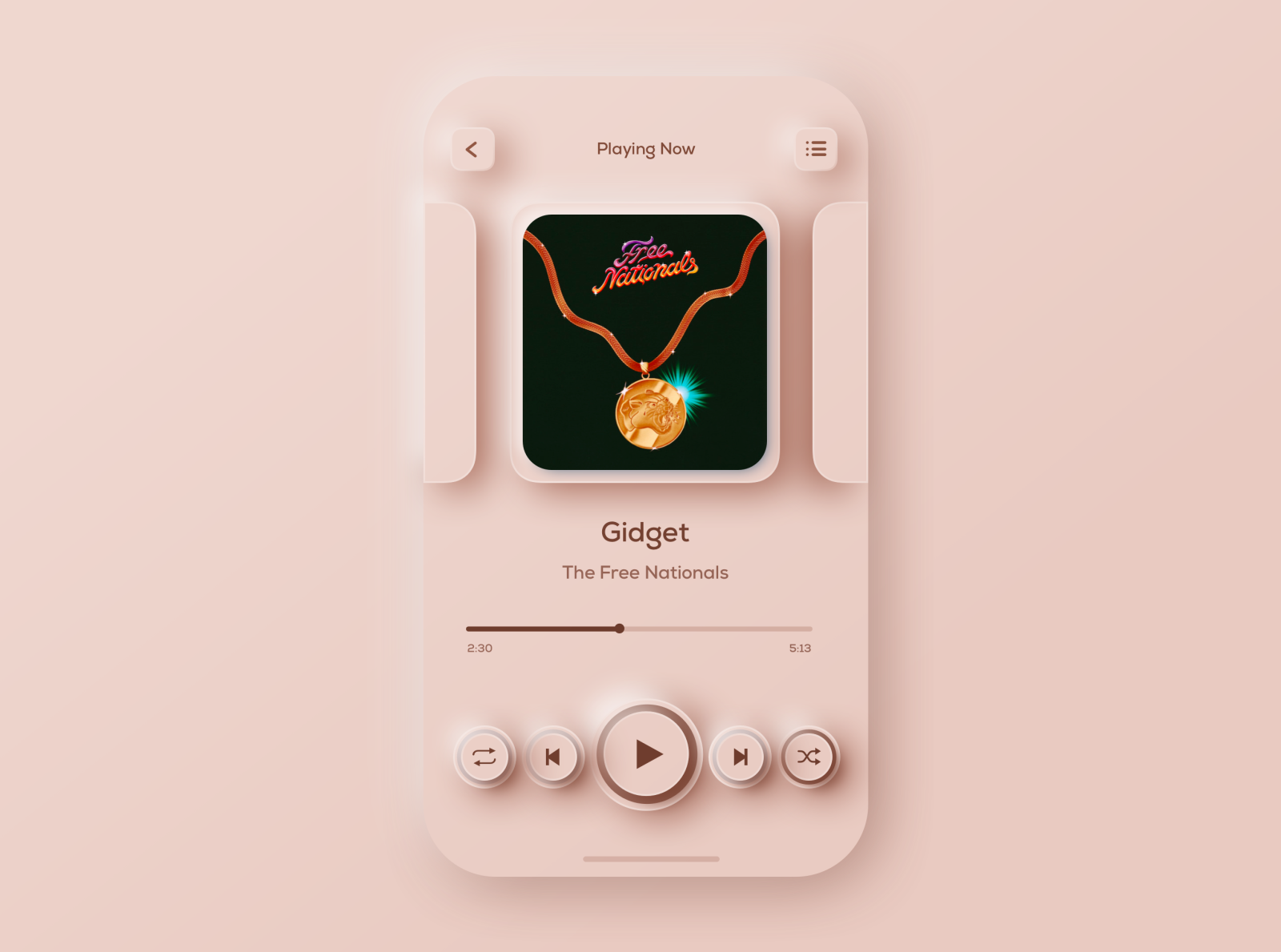 Despite the excitement that came at the beginning of 2020, most in the professional environment do not take this trend seriously. To many, it seems like a step back to realistic images, which web designers have disowned all these years. Plus, flat icons aren't just for aesthetics: they're easier to design and faster to load.

Do not expect that from tomorrow, but neomorphic interfaces will enter our lives. But this is a new direction, which is being actively discussed right now all over the world.

Another trend is chaotic image layout and asymmetric layout. This can be seen on websites, social networks, and logos. The non-standard and unexpected arrangement of elements catches the eye and makes you pay attention to the content. Of course, jumping layout will not end well for reading large texts, and clients of serious companies are unlikely to appreciate intentionally unstable signs. But in creative niches and in the entertainment industry, clutter is now held in high esteem. Let's see examples.

Social network. The design of an Instagram profile, which usually served to organize and organize content, can also perform exactly the opposite function: leveling out the strictness of the arrangement of squares. Here is an example of such a profile design: it is flowing, without clear boundaries, the pictures seem to be scattered in an artistic mess. Asymmetrical Instagram design.

On websites now you can often come across asymmetric layout. It works for the design of small pieces of text: advertising slogans, explanations, lists. The unexpected layout of the text boxes is not annoying because there is a lot of air around. White space in the interface helps us not to get lost and direct our eyes to the desired objects.

In logos, randomness also takes place. Let's take a look at last year's Lamoda rebranding, with falling letters. The old logo was utterly boring, but now it is modern and makes you smile: I associate the letters of the new logo with a constructor scattered on the floor.

What else can be said (but it is not needed)

It's 2021. You may be wondering: where are the animation, 3D graphics, augmented reality and other progress? They came into fashion a few years ago and have been steadily developing since then - mainly in the branding of large companies with large budgets.

Your experience on this site will be improved by allowing cookies.